BETHLEHEM, WEST BANK – DECEMBER 05: A Palestinian labourer works under a large wall painting by elusive British graffiti artist Banksy December 5, 2007 on a building wall in the biblical city of Bethlehem in the West Bank. The Bristol-born artist has adorned Israel’s West Bank separation barrier and Bethlehem walls with new images, including one of a dove wearing a flak jacket and a soldier being frisked by a young girl. His works, along with those of other international artists, are part of an exhibition called Santa’s Ghetto. (Photo by David Silverman/Getty Images) 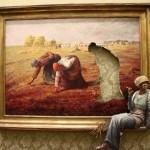